I grew up in a small town in Minnesota just outside of Minneapolis. Without much duck hunting available and being heavily involved in athletics during high school I always treasured our annual 5 day family duck hunt to South Dakota with my dad Jeff and brother Chris, my grandpa Frank, and my Uncle Tim.

While attending Augustana College in Sioux Falls, South Dakota I had the wonderful opportunity of spending much more time with my Grandfather, as well as being able to hunt more.

While I was a junior in college my grandfather's health really started to go downhill as a result of adult-onset diabetes, osteoporosis, a weak heart, and other maladies, It was in this year of 1995 that my grandfather asked me f I could help him finish up the last 15 percent of the call making process to be able to fill all of the orders he had taken for the year. Grandpa would teach me the particular step in the process, then I would practice many times as he watched closely, then I would move on the actual calls that were being completed, still under his watchful eye. Soon the orders for 1995 were complete. Everyone assumed this would be the last set of Heidelbauer calls ever made.

My grandfather was a very generous and giving man, and rarely was he ever able to say "no" to anyone. This in addition to a slight upward turn in health, was once again taking orders for The Mallard Toller duck calls. When I returned to Augustana College for my senior year, he called me and said, "I've got a bunch more orders. Will you help me again, as there's no way I can do it alone." I agreed and we were in business again. This time, I learned every single process from start to finish. I had always heard of the long and tedious house my grandfather put into his calls, but now I was discovering First-hand how labor-intensive, yet fun, that it was. We had joined forces to make another year's worth of calls.

After college graduation, I took a "suit and tie" job. It was again assumed the call making business was over. During dinner one evening, I asked if he was still receiving phone calls from people wanting to purchase his duck calls. He indicated hat he was, and that it broke his heart to turn people down. I said, "Let's do it again!" His eyes lit up realizing that I wanted to continue his business. Very soon after, Ducks Unlimited got word of this, and printed a story in their magazine titled "The Heidelbauer Legacy Continues," reaching hundreds of thousands of hunters! I soon quit my "suit and tie" job and was a full-time duck call maker. I formed a corporation, added some products and dove in head first.the greatest part of this was then being able to spend much of each day with my grandfather for many years.

The year 2002 marked the 50th Anniversary of Heidelbauer Wildfowl Calls. I created a special 50th Anniversary Edition of calls. Although my grandfather had not made calls in many years he pitched in a little bit here and there on parts that he still had the physical strength to do. Many magazines and TV shows contracted us to do stories of our 50th Anniversary. Grandpa was thrilled to have seen a 50th year in business. Later in the year, November 14, 2002 he passed away. I was very lucky to have learned many talents from my grandfather. It's an honor for me to continue with out family business, now in my 15th year as a cal maker, and the 58th year of business.

"You cant believe how well these stools work until you've enjoyed an entire day on one in the marsh. I've had, and used, and thrown away all the other stools I've ever come across until this one."
- Dr. Robert E. Nelson... 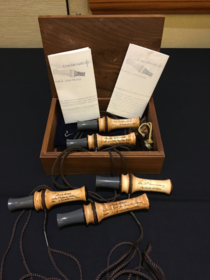 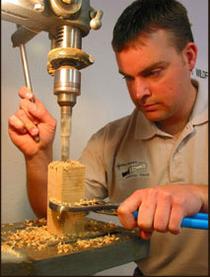 Our trademark call is the Mallard Toller duck call. Our duck call has two primary distinguishing attributes. Paramount is the call's exceptional tolerance. By this I mean that you can "lean on it" with all the breath pressure you can build and the call's... 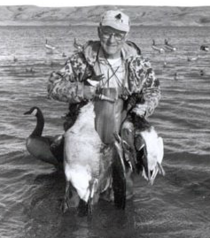 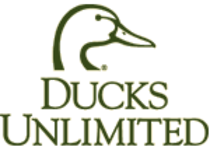 More
Thank you for contacting us! If needed, you will hear back within 48-72 hours.
More

Frank was born in 1918 on a small farm in rural Iowa. As a young boy on the farm, he learned how to read ducks and call them by mouth. He fed and cared for dozens of wild Mallards retrieved from nests by his German-immigrant father who had saved them from the haying blade. He loved hunting as a young boy, but lost his ability to call ducks by mouth when he reached  puberty. Thus the search began for a duck call that could exactly mimic a live duck. He traded a few shotgun shells for his first duck call and began tinkering with the anvil or sounding board to create his dreamed of masterpiece. He had little success to being with. During those years he was confounded by the fact that temperature and humidity changes did not agree with wood and cork. The calls would never retain the sound he was looking for.

Then came World War II. He was a bush pilot flying through the mountains of China, Burma,and India supporting Vinegar Joe Stillwell's Fifth Chinese Army. He flew 305 missions over the "hump" in the Himalayan Mountains. He was said to have pioneered the lowest altitude route over the "hump." This was very important to the service men as Frank could transport cold beverages (Beer!) over the "hump" without them exploding or popping the tops. He survived two near fatal crashes. He returned home a decorated veteran, earning Distinguished Flying Crosses.

It was during the war that he discovered the new "miracle plastics" is what he thought he needed to maintain the integrity of sound he desired. Upon his return home he purchased some acrylic rods and nylon sleeves and began shaping. He tried wide-troughed sounding boards, narrow-troughed, deep-troughed, shallow-troughed, step angles, and shallow angles until he found the perfect combination. He happened upon the sound of a goose first with the breaking of sound from low to high. This eventually led to The Mallard Toller. He had the sound of ducks and geese he longed for. Calls that could be blown softly for working close in birds yet could be blown with all you've got to reach far out, often times in high winds. All of this achieved with a single reed call that would hold its tune indefinitely.

In the 1930's he had many of the calls made by the great call makers of the time, but finally lost the sounding device out of each and every one of them. He decided that when he made his duck and goose calls they would screw together. And they do! This was the second important achievement he desired.

Through the next 40 some years he ceaselessly strove to make improvements whenever possible. The design and superior craftsmanship made Frank's Mallard Toller a coveted, one-of-a-kind tool valued by both everyday hunters and collectors alike. He was a perfectionist!

Frank passed away at the age of 84 on November 14, 2002 in Sioux Falls, South Dakota. He was still an active hunter and fisherman well into his later years, having just completed an annual family duck and goose hunting trip just four days prior to his death. In his later years, he spent much of his time creating hand-crafted fishing jigs and lures. Frank's passing coincided with the 50th Anniversary of his famous Mallard Toller.​

Our Service and Dedication to Ducks Unlimited

My grandfather was very insistent upon giving back to that which has given to us. In South Dakota he was known as "Grandpa DU" or "Grandpa Duck." In the early 1970's Frank was asked to become the State Chairman of South Dakota Ducks Unlimited. During his year as South Dakota State Chairman chapters increased from four to more then 30. In the many years that followed he held numerous positions including Chapter Chairman, Area and Zone Chairman, a member of the State Council, South Dakota State Delegate, National Trustee, National Trustee Emeritus, was on dozens of local committees with many positions, and State Major Donor Chairman, as well as more. He donated thousands of dollars worth of duck and goose calls over the years, but never cared to keep track of the exact dollar amount as that wasn't important to him. Through these years he pledged and fulfilled a Life Sponsor commitment. In 1992 Ducks Unlimited dedicated a slough and wetlands area to Frank making him the first ever singular person to have a Ducks Unlimited project dedicated in their name. The governor of South Dakota proclaimed it Frank Heidelbauer Day as political and business leaders came in from 16 different states for the dedication and celebration. Now, the highest award given to a senior volunteer in South Dakota is called "The Frank Heidelbauer Award." He is remembered every year with a special presentation of this award at the South Dakota State Ducks Unlimited Convention.

Through the many early days with my grandfather, I attended DU committee meetings as I had with my own father as a young boy. I now proudly serve on several local and state committees, am a State Delegate, and National Trustee in addition to other responsibilities. I too committed and fulfill mu Life Sponsor Pledge. Shortly before my grandfather's passing, I pledged and  fulfilled on his behalf Diamond Life Sponsor. He was the first ever Diamond Life Sponsor in South Dakota along with good friend Terry Boxdorfer. I have also upgraded and fulfilled my Sponsor in Perpetuity pledge. I am happy to be working towards my recent pledge of Grand Slam Diamond Sponsor in Perpetuity.  I sadly have not kept track of the number of calls that I've donated nor the dollar amount rose, but am happy to say that it is a significant amount. I am honored to have the ability to make these special duck calls and use them to raise money "For the Ducks!"

Please join Ducks Unlimited and help keep yours and my passion alive. Check www.ducks.org for membership and or a fund raising dinner banquet in your area.

The Mallard Toller is a truly hand-crafted duck call. Each and every part is hand made by myself as taught to me by my grandfather, mostly using tools that he made. My grandfather, Frank Heidelbauer, began designing his duck call in the late 1940's until... 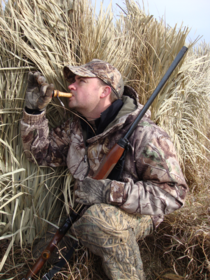